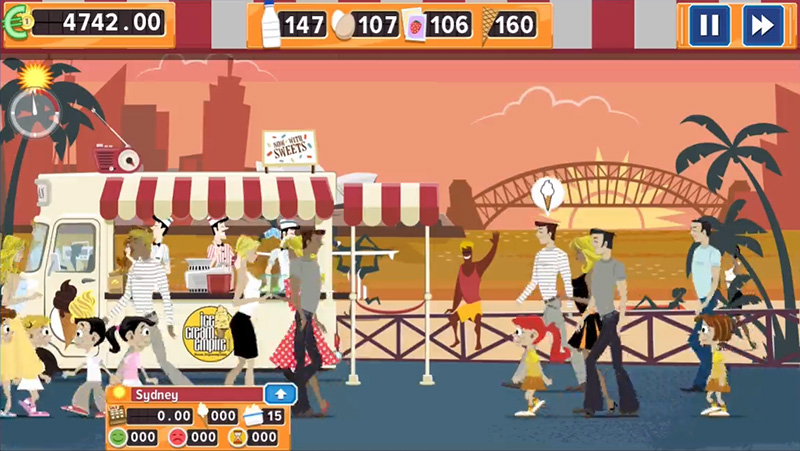 It has almost been a year since I finished working on Ice Cream Empire (ICE) and I am happy it is finally live. I was the lead developer on the game and it was the my first Flash game to target mobile as well as the browser, the sad thing is that it is probably my last too.

Almost a year ago when I started the project the use of Flash for web development was already in sharp decline but the future still looked okay for game development. At the time, however, I was toying around with Haxe and having made a couple of test games was seriously considering developing ICE with it but instead choose to use Flash with Stage3D and the Startling Library. My biggest worry about Haxe was the size of its community and getting support, although Starling was pretty new it seemed to have quite a strong initial following and was backed by Adobe.

Back then I found working with Starling super exciting, suddenly I was able to develop for Mobile and desktop without having to change a line of code (well maybe one or two). It was great, I remember talking an old friend Iain Lobb at our annual Xmas ‘get together’ about how great it was and because if it I had turned my back on Haxe. At this point, I thought 2013 would be full of Starling projects but it wasn’t. Instead, I have been working with HTML5 and again am very excited about it all. It feels strangely familiar, just like Stage3d, being able to view your game on mobile just adds an extra layer of coolness to it all, I can’t wait to experience a game I have worked on running on a console with a control pad :)

Starling is still a great library, it’s just that Flash isn’t ‘cool’ anymore. For me I can build a game in HTML5 and it can run in a browser and on Mobile, no IOS Certificates, no long compile times, no long transfer times etc etc But also if it is a requirement, it can be packaged up with something like CocoonJS. Flash just doesn’t seem as flexible anymore.

So back to Ice Cream Empire, the development of this game took longer than expected, roughly 4-5 months. I learnt a lot during the process, in particular when targeting mobile such as optimising texture atlases for minimal draw calls, devices limitations and then there was building all the menus which was done in code. To add to the time, the scope of the game kept on shifting resulting in menus and gameplay having to be rebuilt. Starling was constantly evolving which was a good and a bad thing, I would write scripts such as an AssetManager to handle my sd/hd texture atlases and a week later a new version of Starling would be released with its own version so I would have to refactor.

So it was a bit of a roller coaster ride with highs and lows but overall I am proud of Ice Cream Empire, it starts off slow but that is the nature of the game, (you play a 3 month period) if you have patience you will learn the game.

I wish I had written this around the time I was finishing the project so I could share some tips and tricks I learnt along the way, the hoops I had to jump through, I’m sure if you’re using Starling you will probably have found out for yourself.

You can get the game here: http://www.icecreamempire.it/